Once the sizable database had been installed I was ready to once again cut my managerial teeth. Did I pick a lower league side to work my Midas touch on and rise through the echelons of football greatness?! Did I hell… straight to the Premier League and Manchester United, how hard could it be after all to follow on from David Moyes…

The initial news screens on the whole remains unchanged with a plethora of information that accumulates as the season progresses and the options along the side bar are rather intuitive to use as well. there is an option hidden away in the preferences menu to allow a pop up helper, though seasoned players will be fine without it. 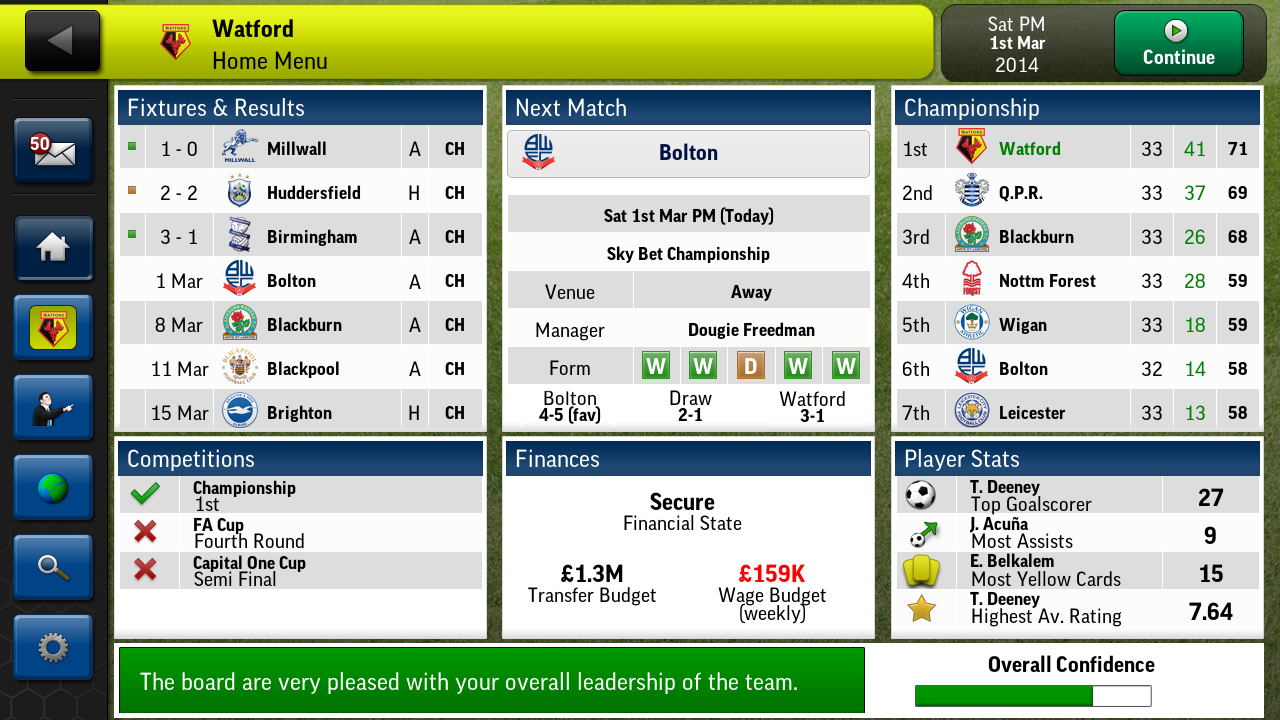 Once loaded up the OCD properly kicks in and I spent a good hour making sure I had my tactics set just right, that the players were on the right training schedules and most importantly of all – putting Andersen and Fellaini straight on the transfer market and offering them to anyone who will listen! Much trimming of deadwood later and adjusting my overall transfer budget to put my wage budget back in line and I’m still playing around in the screen having not pressed “continue” once – there is a huge scope for tinkering in this game and you can easily find yourself dropping hours at a time without playing a fixture.

The match engine on the whole remains unchanged unless you select the “Enhanced” option, a feature new to FMH15 this allows the more complete analysis of your teams performance to help determine who is giving that extra 1-2% and who needs to start warming the bench. For simplicity sake though I went with the regular match engine run my matches in commentary only and very fast…

Following each match you will get a post-match review from your assistant manager giving a few pieces of feedback on what went well and what didn’t go so well. this will help you to get the best of your players by allowing you to correct the errors observed and either implement new tactics and instructions to compensate for these or execute a change of personnel

So what else is new for FMH15? well amongst other changes here are some of the bigger ones:

Football Manager is one of those games that you get out of it what you put in – want to blast few a few matches quickly? You can – set your assistant manager to take over and watch the results. Want to delve deeper into the post-match review to try and work out why your star player has had a dip in form – guess what, you can! The game is as complex as you want it to be though word of warning for the more casual players – don’t expect to last too long at a higher ranked team if your not going to put some effort in, you’ll have a virtual P45 in no time!

Whilst there are in-app purchases in the game its nice to see that they are not pushed onto you, or have a direct effect on your game play experience. they are optional extras that you actually have to dig around a little to find, so props to Sega there and at £6.99 its not earth shatteringly expensive for the amount of time you’ll inevitably end up spend playing it.

New to the series? prepare to lose hours of your life to this game – it fits perfectly into your daily routine  either on the commute, or at lunch, or in the bath.
Old hand at the game? The updated squads are always nice as is the search for the next wonderkid – the lack of cosmetics overhaul might leave you feeling a little deflated but the new features will soon win you back over and before you know it your addicted again.

So old or new to the series, if you have a few £ sitting around its certainly worth dropping them into this game – you’ll be saying “just one more game then I’ll do some work…” in no time