Following on from my Destiny Review (read it -> here <- by the way) it dawned on me that I wittered away a good 90+ minutes of my life standing in line for the midnight launch happily playing the GameBoy Advance classic Pokémon Emerald.

Except I wasn’t playing on a GameBoy advance, nope, I was on my Google Nexus tablet instead.

Through the magic of emulation I was running around the Hoenn crushing all in my path on a glorious 7″ back-light screen and whilst admittedly the controls are a little cumbersome on the touchscreen it was still every bit the experience I remember from the GBA system.

So what is emulation? well, in a nutshell its a program that runs on one system that duplicates another system and plays games from that system by loading a ROM – a sort of digital game file. Before the advent of smart phones and tablets it was solely the plaything of desktop computers and laptops but now technology has gotten more powerful and more mobile – why hasn’t emulation captured the imagination of more?

A quick Google search for android emulations reveals a whole wave of emulator programs for a number of consoles: Gameboy, Gameboy Advance, N64, Nintendo DS, Playstation 1, SNES, PSP, SEGA… the list  goes on! The back catalogue of games it opens up as well is phenomenal making it a haven for reliving games played in years gone by.

For some of the earlier systems such as SNES, Gameboy etc the simplicity of the console interface lends itself wonderfully to being emulated on a touchscreen device

The simple directional keys, start, select, A and B (with the occasional R and L buttons) makes for a really clean and easy to use interface. Left handed? Not a problem as many emulators allow you to customize the positioning of the controls on the screen. The menus are often easy to use and the emulators often come with multiple save slots available.

The withdrawals to emulation come with some of the newer systems such as the PSP and Nintendo DS. For some reason emulation seemed to drop off the map a few years ago and as the gaming systems became more powerful, the emulators lagged behind in development – combined with a relatively limited amount of power available from tablet or smartphone devices in comparison to the native device, emulation as a medium for gaming has suffered as a result.

Newer systems often have more complex input systems (analogue sticks) and multiple buttons (8 on the PSP for example) making it a nightmare for implement on a touchscreen let alone use. and the strain the graphics and running power puts on the operating system can also impact on the game play experience 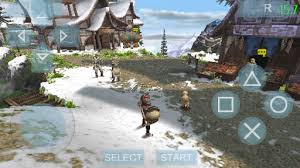 But, as tablets and smart phones start to pack more power, they are able to handle some of the more taxing games, so where does this leave us with using a touchscreen for games which give us a screen like the Monster Hunter Freedom screenshot above? Well, in short: we cheat.

With many systems now being Bluetooth Compatible it has now become possible to link controllers to a tablet or smartphone and assign them the corresponding buttons in game making it much more feasible to play games from systems with a number of buttons or more complex directional controls.

As technology evolves then hopefully so will emulation, and whilst I don’t expect to ever be able to run a 3DS game in 3D from my phone, maybe one day, just one day I’ll be able to run it in 2D instead.

Final Note: The usage of an emulator is also completely legal, and any reverse engineering of a system’s BIOS to make emulation possible is also legal. ROMs unto themselves are also perfectly legal to own, copy, and distribute. These rules do NOT apply to copyrighted material however, and it just so happens that most ROMs are made from data that is still under copyright. However, it IS legal to copy an officially distributed piece of copyrighted software as a personal backup – so if you own a hard copy of the game its all good!